Suzuki?s GSX-R series, introduced amid great fanfare and carrying the company?s highest hopes in 1985, is synonymous with performance and has become one of the most evocative marques in motorcycling. Without question, the GSX-R turned sport motorcycling upside down. Its groundbreaking design established an entirely new category of race-replica motorcycles, in effect bravely pushing the sport into an area where no other manufacturer dared to go. And, just as important, Suzuki forced competing manufacturers to respond to the GSX-R by taking up new technologies and often abandoning their own favored designs. To say the GSX-R forced the hand of sportbike makers everywhere is a dramatic understatement.

This book explores the roots of the original GSX-R750 concept, its showroom and racetrack successes, and how its eye-opening performance, lightweight design, and charismatic personality established a new market segment that Suzuki continues to define. Each generation of the GSX-R family is explored through interviews with Suzuki engineers and designers. Suzuki as a company garners impressive loyalty from its employees. Virtually every member of the original GSX-R development staff is still associated with Suzuki, and they all offer recollections of the bike?s gestation, providing priceless insight on the breakneck-speed engineering required to bring a light, fast race bike to the street.

Racing, literally the raison d?être for the GSX-R, is carefully reviewed along the way, including the national and World Superbike competition histories of each generation. Every aspect of the GSX-R?s racing experience?the great wins and the near misses?has helped inform the design of the street bike, which, in turn, formed the basis of the next generation of race bikes. Suzuki?s slogan, ?Born on the track, returned to the track,? is more than just marketing speak?it is the engineering credo.

Readers will be taken inside the off-limits Ryuyo R & D center and proving ground, where the engineering and development of the GSX-R models are carried out. This is followed by a virtual factory tour that shows a GSX-R being built step-by-step. Suzuki GSX-R: A Legacy of Performance is the complete insider?s look at the most influential and winning marque in motorcycling. 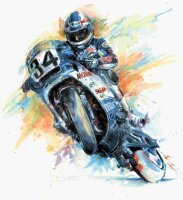