In the year 1984 the Vmax debuted at a meeting of US dealers in Las Vegas. Due to the influence of the popular quarter mile race in the USA, a motorcycle was developed, which was capable of driving the ¼ mile in less than 11 seconds, which made it the fastest accelerating serial motorcycle of its time. This was realized with the help of a V-4 engine out of a Yamaha touring motorcycle, whose performance was optimized by the diverse use of a V-Boot system and it reached 150 horse powers. The power transmission from the five speed gear shift to the 150 millimetre wide rear wheel resulted from the drive shaft. When the bike was completely refilled with fuel, the total weight was 283 kilogram. The bike was equipped with brake discs overall, in the front it was even a four piston brake disc. A weak point, as it was often with Japanese motorcycles, was the chassis. At high speeds the Vmax tends to weave. The double sanded steel frame, the motorcycle fork and the conventional rear wheel rocker with a strut were not able to completely eliminate the high speed weaving. For lack of space, the 15 litre petrol tank was mounted underneath the seat and is a reason for the rear focusing of the motorcycle. The final production end was in 2006. The successor (1,679 cubic centimetre engine with 200 horse power) is available since 2008.

Notify me when this product is available 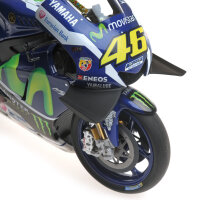