Karl Heinz Weiner (born 1958) works freelance as a grafic designer for more than 10 years.
The man from the "Ruhrgebiet" and father of two daughters studied "Visuelle Kommunikation" on the University of Duesseldorf. After his graduation he works for an advertising agency in Duisburg several years.
His love to motorcycles accompanies him the whole life. Actually he rides a Moto-Guzzi T5 sidecar motorcycle. Furthermore he owns a MZ Ts 250, a Maico M 200 and also a Yamaha XS 850.
His passion for the sport is assigned to his activities as a grafic designer.
As a freelancer he works for the magazines "Motorradfahrer" (D). Other publications were done for magazines as "Motorrad, Reisen und Sport" (D), "La Moto" (E), "Classic Bikes" (GB) und "Superbikes" (S).
The way he shows his love to bikes in his art works, Karl Heinz says: "My favourites are water colours. I combine them unconventionally with different other materials and colours, just as the are standing around on my desk. For example a series of historical racing scenes were painted on usual wrapping paper."
Beside his art and family there are still two dogs and about 30 boys and girls who determine his life. Karl Heinz works as a coach in the team sport "Handball" as his fourth passion. 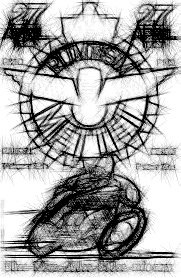 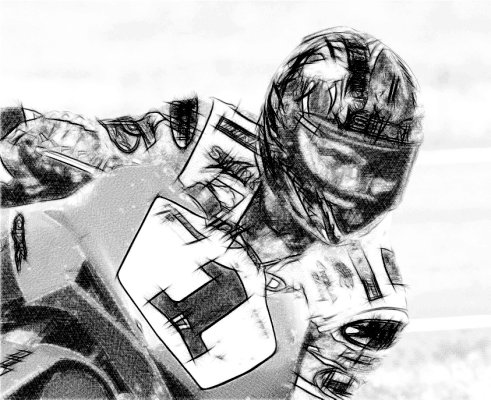